Skip to content
Say hello to the Xhibitionist, a yacht design by Sweden-based Gray Design. If you’ve never heard of this design group, it is best known for creating vehicles, not only yachts, that are built with the goal of ultimately becoming a real product.

To do so, however, requires a large amount of focus based on functionality, proportion, and aesthetics. By looking at the Xhibitionist, we can clearly see the level at which Gray Design operates. If you haven’t had a look at the gallery yet, now is the time to do so; it will ultimately help guide you through what comes next.

Upon looking at the vessel, the lines, geometries, and overall shape look a lot like a supercar. Just imagine some wheels where the shape naturally calls for them, or take the aerial view, for example. Looking at it closely, you’ll see a clear automotive-inspired shape. There’s a hood or engine compartment, windshield, and even a spoiler, which actually acts as the beach deck. 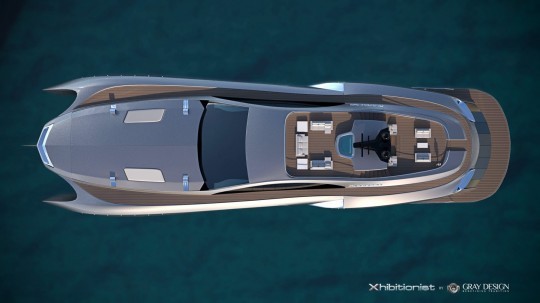 Now, let’s not get all wrapped up in the car-like properties of the yacht. Being a yacht, a number of ideas and perks are found. For example, unlike other yacht design we’ve seen, the Xhibitionist shows up with a very small superstructure. Why?

The moment we realize it’s a design meant to become a real thing as soon as possible, its low-rise structure makes sense. Plus, it looks absolutely stunning. This sort of structure also helps complement the sides of the ship to offer an even greater supercar feel. But instead of gull-wing doors, there’s visibility into the interior spaces.

One of the most fascinating solutions presents itself at the bow of the ship. Here, that so-called hood opens on massive hinges to reveal three helicopter pads. But it’s not the outrageous number of helicopters that we need to pay attention to; it’s the fact that this entire surface area is covered in solar panels. That’s right, during the day, this space is meant to recharge electrical systems onboard. 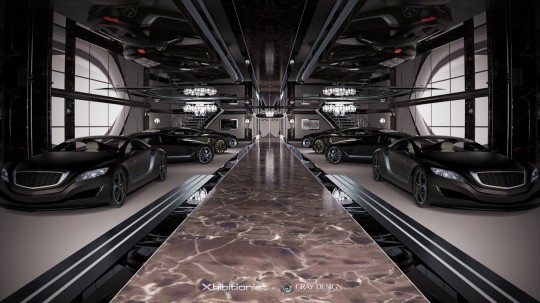 Heading aft, we can see a large sun deck atop the ship featuring a jacuzzi and plenty of space to just hang out and do nothing. This area is extended into the deck below by means of a set of staircases found starboard and port the ship.

As expected, the billionaire lifestyle fully unfurls inside. The interior of the vessel reveals marble and granite flooring accented by semi-precious metals and chandelier lighting. The roof, too, is completed in such a way as to reflect the image below, offering a wonderfully spacious feeling as we walk through spaces. One of the main features to take into account is the large car garage that also acts as an exhibition center, hence the name Xhibitionist – or is it because of the helicopters?

Another area revealed to us via the rendering is an interior lobby furnished with seating and tables to set down your cocktail. Other than this, we have nothing else to help us imagine the lifestyle we can expect inside. Mind you, the interior is always open to the eventual owner’s tastes.

Personally, I see this yacht as the perfect vessel to showcase the root of luxurious modern-day yacht design: the automotive world.